This  project is based on Wai – Water/Flow.  An installation format using paint and wood is used to explore the varying perceptions of a river system in Aotearoa, New Zealand. The work is to be called Te Mate Purū which translate to in Blue Death.

As an artist, developing projects that connect to people and the environment is important. Research is paramount as well as following any leads the idea has produced. If the concept lacks comprehensiveness then using intuition, following my nose and doing visualization drawings usually helps.

The objective is to show the disruption of Mauri – a Māori concept associated with the well-being of a body of water. The work will also reflect the sometimes difficult conversations that arise between the public, Iwi (tribe) and government departments surrounding water issues.

The cultural and political associations around the wellness of a river are of interest and this relates to my Wild New Zealand and Ko au te awa work where the exploitation of natural resources are looked at. There are many artists whose work explore the environment. Anthony Gormley’s Stay (2015) and Russell Becks Anchor Chain (2002) are two from New Zealand.

When researching what pollutes our rivers and streams, it’s easy to assume that all our bodies of water are pristine to begin with. New Zealand’s clean green image (Fig 3.) sells itself as ‘Gods own’ but the truth is, we are a country built on sheep and cattle (Fig 4). Our farmers whose herds bank almost every waterway around the country help tell that story, one Māori are also invested in given that they are tangitawhenua (native, indigenous) and practice kaitiakitanga (guardianship, conservationism).

Māori have an extremely close relationship with Wai and it could be said that the culture couldn’t have existed here in New Zealand without it as the very mode of transport to New Zealand was in a waka (canoe) crossing the seas from the ancestral lands of Hawaiki. Early Māori, settled next to rivers which offered tribal identity, food, transportation and treasures in the form of Pounamu (Greenstone).

According to the Reed Dictionary of Modern Māori, Mauri means life principal. Other definitions are life force, vital essence, an essential quality or a vitality of a being or entity. This Māori concept is liken to a health barometer that can rise or fall depending on the condition of the body of water.

In a report titled Wai Māori – Māori values in Water, Mike Grace (2010) the Māori Liason for Te Upoko Taiao highlights the close relationship Māori have “both spiritually and physically with water in all its forms.” Grace identifies “a range of classifications for water depending on the particular qualities of the water-body”. Wai – kino (polluted) … Wai -mate (dead water) … Wai-tangi (grieving waters)” (ibid) – are three my work intends to address.

For clarification the definitions are (Grace, 2010):

Wai – kino – The mauri of the water has been altered through pollution or corruption and has the potential to do harm to humans.

Wai – mate – This class of water has lost its mauri and is dead. It is dangerous to humans because it can cause illness or misfortune. Geographically it refers to sluggish water, stagnant or back water. Some tribes refer to it as ‘waikawa’.

Wai – tangi – Refers to a river or part of a river which through some mishap has caused death, much pain and grieving to the tribe. 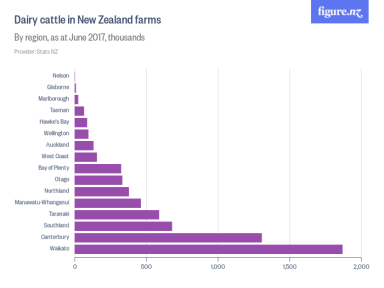 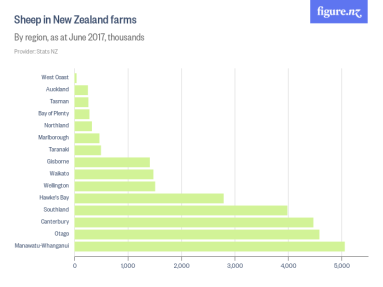 Dry cattle, deforestation and agriculture are industries that are also accountable for the degradation of water quantity and quality. Tony Wright’s (2017) Special report: how polluted are New Zealand’s rivers? says the following

“It’s easy to forget New Zealand is one of the most deforested nations on Earth, with only 25 percent of our native forests left untouched, and they’re mostly on the west coast of the South Island. So while New Zealand does have pockets of beautiful and unspoiled native forests, the majority of our land has been cleared and is used in the agriculture, and in particular, the farming industries. We’ve also cleared 95 percent of our native wetlands, which if they were still in existence, would play a major part in protecting waterways from pollution.”

Wright (2017) continues and states the main contaminants as: “Sediment: Fine material from deforestation, nutrients: nitrogen and phosphorus from livestock urine and fertilizer and Bacteria namely E. Coli from livestock excrement.” The continuation of these practices will proceed to disrupt the well being and functionality of our rivers if these activities aren’t challenged.

In the Resource Management Act (1991) Pages 72 – 76 under River and Lake beds the restrictions on certain uses of beds of lakes and rivers clearly state what can and cannot happen to a body of water. However in 2010, Puhinui Stream, a 12km stretch of water in Manukau Auckland was voted by the Auckland Regional council to be the dirtiest stream out of the 31 they monitored. An article titled Auckland Council wins top prize at NZ River Awards (2016) recorded the council’s Wai Care team accepting the ‘Most Improved’ award for the clean-up six years later. Despite this good news, it does indicate the do’s and don’ts of water usage are often ignored by the general public.

Similarly, Stig O’Tracey’s (2017) reader report claimed that the fenced waterways scheme is “nothing but a smokescreen, a dishonest attempt to delude people that meaningful steps are being taken to protect waterways”.  So what is the fenced waterway scheme and can we lay blame on dirty dairy for polluted rivers?  The Sustainable Dairying Water Accord (2017) state that ‘All stock must be excluded from any permanently flowing rivers, streams, drains and springs…(ibid) by May 2017’. Lakes and wetlands are also included in this report. But is this happening? Research indicates there is significant evidence, rules are being unheeded as in the account by Adam Bradley ‘Cattle in Styx River raises ire (2018). In it Bradley notes a Spencerville resident taking video footage of cows grazing on the banks of a Christchurch river.  This is among a tirade of reports with headings like ‘Hundreds of dairy farmers caught breaking rules’ and ‘Recidivist dirty dairying farmer cops $66,000 fine’ These help validate the number of mismanaged farming practices amid the farming industry but more importantly, help paint a picture of the tremendous pressure rivers are under to sustain its Mauri Ora – (health). 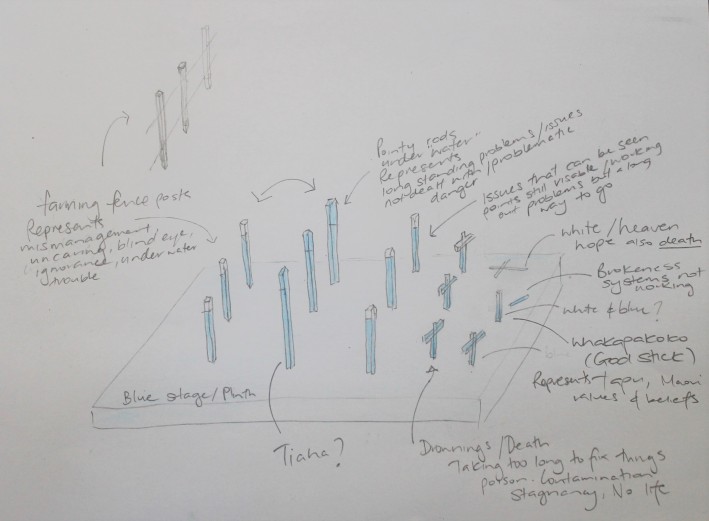 Above. The draft consisted of a low lying plinth on which stands primarily blue painted posts of the same tone. These posts are free standing – the height yet to be determined as was the finished colour palette.

Camouflage art was a great way to maximize the idea of having something hidden in plain view. With pollution in a river often seen but mostly ignored, it was an obvious choice to use this type of illusion to make a point.

Once the connection of farm fencing and wandering cows came into the research, the concept became clearer. The pointy end of a fencing baton became a tool to represent a variety of content, typically danger but also neglect and reckless abandonment of unwanted materials (rubbish). Playing with scale was also essential – an attempt for the work to draw attention to itself, thereby pushing a troubling water issue further into the limelight. Significantly, ‘prickly’ conversations had between Iwi, Government departments and the public on who’s to blame for a toxic river, was always a fundamental point worth making. The free-standing timber. stacked tightly onto a limited space, gives an overall  impression of a mistreated, fragile/flawed water system.

To represent Māori values – a fundamental element given the basis was working with Mauri, a relic in the form of a Whakapokaka or Godstick was used. These implements often represented an atua (God) namely Rongo the god of agriculture whose protective qualities would often be called upon to grant bountiful crops.

Developing a Whakapokaka in the workshop did not necessarily mean detailed Whakairo (Māori carving) had to be chiselled onto the rākau (wood) only a hint of itself was needed.

The decision to paint the back of the posts black were a way to deliver the Wai kino, Wai mate and Wai tangi concepts (Fig 11). The conclusion of Te Mate Purū is seen at the front of the work, blue crosses seemingly ‘under water,’ representing hidden truths (toxicity, pollution and death).  Ceasing to be ignored is the white ‘floating’ cross in stark contrast – a reminder that death is indeed present. Its existence is as real as its neighbouring (brother) the “unseen” blue cross. The lone but silent Whakapokaka godstick again reverberates the values held by tangata whenua of what they see is a sacred living resource, ties the piece together.

Dead, polluted, unswimmable water isn’t serviceable to anyone and water brings its own risks. Deep seas with huge surf, wide raging rivers, floods and even tsunamis are natural occurrences man has had to pit himself against since his beginning. Throughout time, no matter what culture the story carried through has always been the same. Water is life but it also needs to be guarded against and protected. The role art plays in our society is to bring awareness and highlight the current complexities that arise as we grow in population.  With climate change the economic impact on a diminishing resource means having sustainable practices which can cater to an ever demanding developing world is never more pressing. 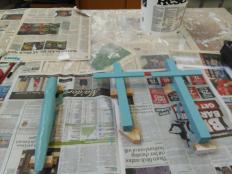 Fig 5. Keane, B. ‘Te Māori i te ohanga – Māori in the economy’, Te Ara – the Encyclopedia of New Zealand, Retrieved from http://www.TeAra.govt.nz/en/te-maori-i-te-ohanga-maori-in-the-economy

One thought on “Te Mate Purū”